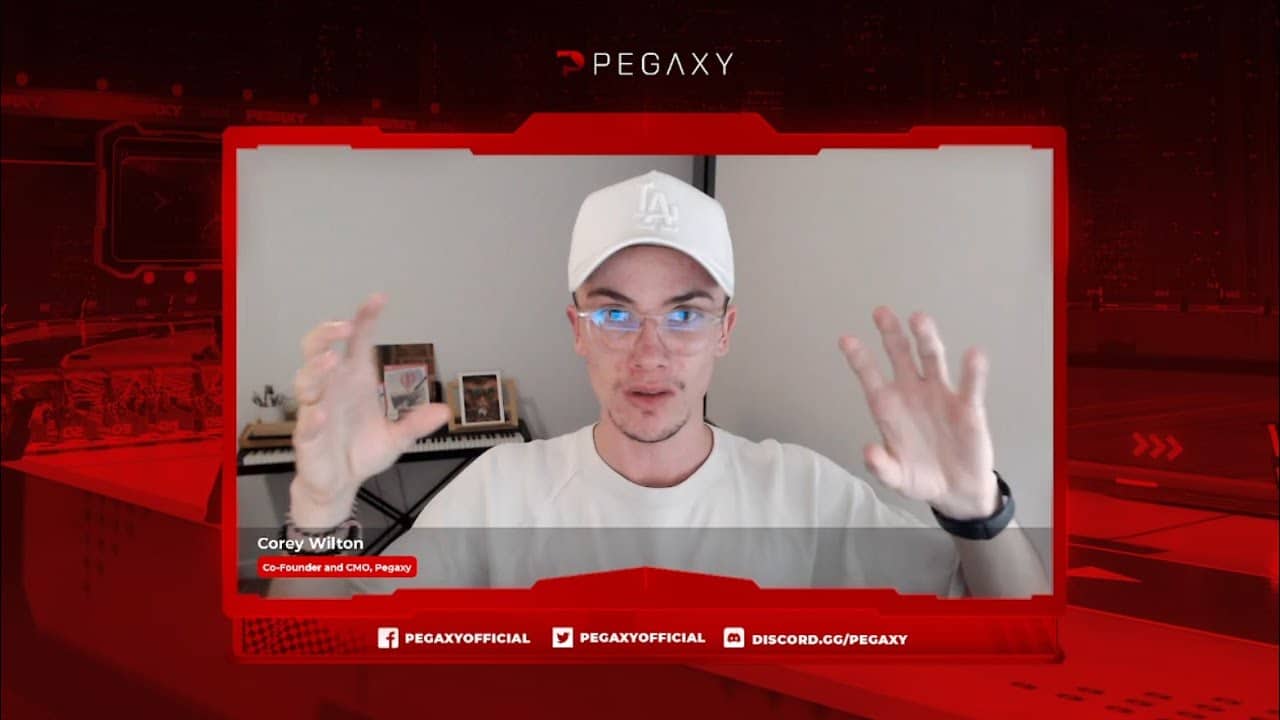 This Pegaxy Insider recap article will do its best to capture then summarize the ideas and answers of Pegaxy’s CMO, Corey Wilton.

For the detailed explanation; watch the full video on Pegaxy’s Official Youtube Channel

Thoughts about the current price?

On the Liquidity Pools…

Corey talks about Updates (some to be shipped, some for future, some ideas)

Pegaxy Satellite (for the future)

Still theorizing (not sure): Baby Pega with Variable Energy

Still theorizing (not sure): Increase the amount of players per Race

Why did the $VIS Price go down after the Breeding Event?

How much will the Stadiums be?

What are your future plans after Valentines Day, what event could we expect?

Is there a way to Rent to Own in the marketplace?

Does the new Energy system apply to the already existing Pegas?

How about Feeding a Pega?

When will the Breed & Racing Cooldown Switch take effect?

What is your Marketing Plan in the short term?

How about a Jousting Minigame?

How many Pega do you have? (asked to Corey)

When will we be getting Official Documentation for the API Endpoints for PegaLookup?

Whats the Utility of Rarity in Pega?

Can we have Pega to be bought and sold using $VIS?

Any Info on the Lootbox & Gacha system?

When are you going to fix the website so it becomes responsive to Mobile?

Is it possible that only Pega owners & renters can buy/sell $VIS.

Why did you burn all the $VIS from the Valentines Event instead of putting it into the Liquidity Pool?

Mint rate is starting to overtake the Burn rate of VIS, does this concern you at all?

Transaction Fees and Withdrawal Fees to be added to the LP directly… Thoughts?

Will the Reduced Energy be the cap for the day, or will we just need to be more active in racing throughout the day?

Could you make a function that allows for exchanging Pegas without a Middleman?

Will Mobile be available for IOS and Android?

Pegaxy in the Ronin Chain?

Any info on the PGX token, and will there be any other utility for it?

When will Pega Classes work?

Any chance to add a $VIS betting mechanism?

Are you planning to have Skill-Based gameplay in Pegaxy?

Is it possible to get Two-Factor when transferring a Pega?

Will Valentines Pega have more effects as it completes more races?

What if reward for breeding was energy itself? (Breed Count correlating to Energy)

If the game is not meant to be pay to win, how would someone who could not afford Gear or Food compete against someone who can?

When skilled-based Pegaxy arrives, do you expect skilled players to make substantially more $VIS than someone who is mediocre?

Any ways to improve the user experience of Trezor Users?

Will the Mobile Version be Trezor friendly?

What’s your plan with Pegas that have low stats?

Are you worried about the speed of the number of Pega being born?

What is Projected Lifespan of Pegaxy?

Virtual Reality where I can see my Pega? (Oculus/AR etc..?)

Can you create an offline use for $VIS?

Can you swear in Filipino, please?

Could you make it possible for managers to change the profit share without taking back Pega?

What is your target or optimal price for $VIS?

Is it possible to lower the name change $VIS cost?

Are you planning to add more filters in the marketplace?

Utility of the Valentines Pega?

If you sell a Founding Pega, is the NFT Profile Picture attached to the sale?

Will we maintain the 20% minimum win rate?

Are you planning to attract huge or bigger investors?

Could you make it minimum of 20% for Scholars?

Will there be a voice-chat in game?

How about a 1 – 10% to get a higher tier Pega from maximum Breeding?

What tools do you guys use to create the 3D Pega

How about races where people can race without energy but not earn?

Do you have plans for Esports in the future?

Is the long term vision where people will still be making money in Pegaxy 5-10 years from now?

How does the game make money other than the marketplace?

What did you Major in? (asked to Corey)

What is the Company’s Mission Vision?

Yes, you can fuse your Pega at any breed-count however the resulting Pega will always be:

If you decide to fuse two Virgin Pacer Hoz, regardless of their breed count, the resulting Pega will be a 2/7 Rare Hoz.

The resulting Pega always has the “lower” bloodline, this is similar to the breeding mechanic.

In this game, you will need to own at least 1 Pega in order to play. You can buy a Pega in our marketplace. If you want it to try first before buying a pega you can also rent one and start for free or cheaper cost depending on the renting type. There are 3 types for renting:

1. Fixed fee renting – Here, you can play it for a certain amount of time. For instance, you can rent one Pega for 100 PGX for 2 days. Then you’ll earn as much as you can during those 2 days.
2. Profit share method – Here, owners are able to share profit amount (e.g. 70% for scholar and 30% for manager). This option allows you to start the game with almost 0% investment.
3. Direct Rental – This system is specifically designed for Guilds.Direct Rental allows a Manager to create a rental contract which they can rent out the Pega directly to the Scholar for them to accept. No other person besides the Scholar it was sent to will be able to accept the Scholarship.

You will be eligible to join the race once you have 1 pega, upon joining a race, you will be pushed into a lobby matching your Pega’s class, once the lobby is full, watch your Pega race against 11 others, if you manage to place in the top 3 you will be rewarded with VIS tokens.

No, you just need to pay gas fee for moving your pega to racing metaverse after that you can race your pega without paying gas fee.

Each Pega has 25 energy capped, 1 energy is restored per hour and 1 race needs 1 energy.

For you to be noticed by Pegaxy Managers you need to be active in their community, you can also share your talent as some Pegaxy Managers look for scholars to be their artist, designer, editor etc.

There are 3 types of renting.

1. Fixed fee renting – Here, you can play it for a certain amount of time. For instance, you can rent one Pega for 100 PGX for 2 days. Then you’ll earn as much as you can during those 2 days.

2. Profit share – Just head on to the Renting tab https://play.pegaxy.io/renting and keep on pressing F5 (refresh) button until you see a “x% for you” you will be needing MATIC tokens as gas fee for you to rent and you can use that Pega to play and earn!

3. Direct Rental – This system is specifically designed for Guilds. Direct Rental allows a Manager to create a rental contract which they can rent out the Pega directly to the Scholar for them to accept.

You can use PGX and USDT as the currency for buying a Pega on the Pegaxy marketplace, you will be needing additional MATIC tokens as gas fee.

Step 2: Proceed to https://kyberswap.com/#/swap, connect your metamask, and switch to Polygon Network.

Step 3: Under “From”, click on “MATIC” then select any cryptocurrency (that is in Polygon Chain) you will use to purchase VIS tokens.

Tips: 1% slippage is enough but if you would want a faster transaction, increase it to 3% or 5%. MATIC will be used for gas.

DONE! The VIS is in your MetaMask!

You can download Kiwi Browser or Yandex in Google Play Store and install MetaMask as an extension (from Chrome Web Store).

You can also use MetaMask app which can be downloaded in Google Play Store too!

1. Install Metamask to your playstore/appstore
2. Open/Create/Import your Metamask wallet
3. After you create/import your metamask wallet,
Click the three Gridlines at the left-side
corner of your screen.
4. Select Browser
5. At the Search bar, type play.pegaxy.io
6. Once you are inside of play.pegaxy.io page,
click the Connect tab, a small window pop-up appear then click Connect on Metamask

You can only breed opposite gender. Pega are metal machines, therefore when breeding, there are no restrictions. Breeding is possible with parents, children, grandchildren and so on.

The length of time needed for a baby Pega to be able to breed is 96 hours for all bloodlines.

– The moment you connect your Metamask wallet on our website, is when your 15 days countdown began.
– Claim any time you want after your VIS is unlocked. You are not required to claim the moment it unlocks.(If you didnt claim your VIS after it unlocks, the following VIS you earn will be unlocked as well)
– The 15 day countdown resets from the point you claim.

The PGX is per breed. The VIS is per Pega, add the VIS cost of each Pega and then just add PGX.

Reset your metamask account, to reset your account go to metamask settings > advanced > reset account. This should clear all your pending transactions. Then try again edit the Gwei.
For your reference check the gas fee here https://polygonscan.com/gastracker

Changing your Pega’s name is now available! Click you Pega and choose the option to change name which can be seen on your Pega’s profile. This comes with a fee of 550 VIS.

Yes, what you have to do is go to My Assets > My Bids and withdraw it.

If Polygon is not Suspended in Binance:
1. Claim your locked VIS tokens in Pegaxy website
2. Check if the VIS tokens has reflected in your wallet in Metamask (If not, import VIS token address: 0xcC1B9517460D8aE86fe576f614d091fCa65a28Fc)
3. Swap VIS to USDC in https://kyberswap.com/. Make sure to add USDC Polygon CA to your MetaMask: 0x2791bca1f2de4661ed88a30c99a7a9449aa84174
4. Send your USDC to your Binance. (Make sure to select Polygon Network in Binance USDC Deposit)
5. Convert USDC to USDT then sell your USDT in P2P Binance in exchange to your local currency.

If Polygon is Suspended in Binance:
1. Claim your locked VIS tokens in Pegaxy website.
2. Check if the VIS tokens has reflected in your wallet in Metamask (If not, import VIS token address: 0xcC1B9517460D8aE86fe576f614d091fCa65a28Fc)
3. Swap VIS to USDT in https://kyberswap.com/. Make sure to add USDT Polygon CA to your MetaMask: 0xc2132d05d31c914a87c6611c10748aeb04b58e8f
4. Bridge USDT Polygon to USDT BSC using Synapse Brigde – https://synapseprotocol.com/ or xPollinate – https://xpollinate.io/
5. Send your USDT to your Binance. (Make sure to select Binance Smart Chain BEP-20 in Binance USDT Deposit)
6. Sell your USDT in P2P Binance in exchange to your local currency